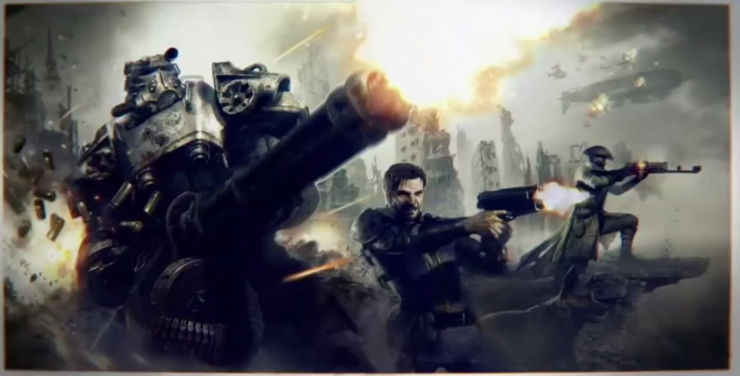 Events in Fallout 4 take place in Boston, Massachusets, 210 years after the Great War. Year 2287 is the time of our gameplay. A decade after the events of Fallout 3 and 6 years after New Vegas. Timeline of these 3 games can be listed as below:

Most of the game takes place in year 2287, but the beginning of the game actually starts just before the nuclear bombs hit the country, during when people are trying to head to the vaults right in the middle of chaos. A nuclear bomb explodes at a near distance to our protagonist sole survivor and their family while they’re trapped on the edge of the vault, but eventually the platform under them lowers just in time and they manage to survive. Then they’re put into cryosleep for more than 100 years. And in year 2287 we wake up from our sleep and find ourselves in the middle of the wasteland trying to undersand what’s going on. Here is a short footage of what we can expect from the game:

The latest and maybe the most innovative new feature in Fallout 4 is building your own settlements.

Since your settlements can be attacked by raiders, supermutants, and other bad stuff, it’s good to have strong defenses. You can even see a settlement which has an incredible bar.

You build your settlements with raw materials and parts you found from the wasteland. You can craft a wide selection of items with them. This is one of the greatest standing out features in Fallout 4. Here are two videos where you can check out a few of the greatest settlements built by various people and a speed-motion building action of a two storey house:

Vault-Tec Assisted Targeting System (V.A.T.S.) may be familiar to some of you if you have played previous Fallout games. V.A.T.S. is one of the unexpandable features of Fallout and we of course are happy to see it again in Fallout 4. The new V.A.T.S. is almost the same with the ones that we’ve met in previous games, but this time it is more realistic because now you can’t just fully stop the time forever, but you can concentrate in a slow motion. Yes, that’s right. Now you will get into slow motion during V.A.T.S. and i actually think that it is better this way. Gives the realistic feeling instead of just stopping the time.

You can choose between various strategies using VATS. You can headshot for quick kills, or shoot your opponents legs for slowing them down or you can disarm them by shooting their weapons.

The new crafting system allows you to use every lootable object in the game to your own benefit during crafting. You can build items and structures for your settlement, customize weapons and upgrade your armor. You can scrap items to use in your workshop for crafting new items.

In game you will have your workshops to craft and upgrade items. And you also have a stocking space for our power armor. I don’t have to mention that there are different types of power armors in Fallout 4.

So these are the main new features in Fallout 4, but not only. You definetely will find many more interesting things during your gameplay. It’s a huge open world of Boston that you can explore which has many freaky scenarios in it. When playing Fallout 3 i’ve never got bored, and i’m sure that it will be the same for Fallout 4.

This may be a good place to introduce yourself and your site or include some credits.