Hey folks!! Ever wondered if there’s a “Survive Zombie Apocalypse Book” around?? I know that “zombie” theme is quite popular these days and everyone is going crazy about them with the combined hype from serials like “The Walking Dead”, “Z Nation” and etc… I would have lied to you guys if I said that I’m not a braineater fan club guy.. Well, which geek isn’t??

Some of you may think that zombie apocalypse is just a fiction which is told again and again in different scenarios with same concept but a little retouch. Ok, we know that zombies don’t exist (or do they??) for now and the world is not going down because of an epidemic for at least some time in front of us. 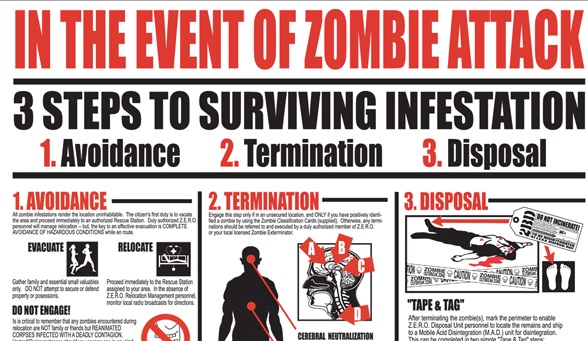 But does it have any possibility to be real?? At least someday?? I must warn you that things we see on screen usually become our reality one day. Think of the Sci-fi movies of 70’s-80’s. Things they were rating as impossible have now becomed our reality. What if same goes with zombie apocalypse?? Maybe goverments are hiding something from us??

Ok, conspiracies are not the main subject of this article, that’s why we’ll talk about them at some different time. But the thing is that defence agencies actually take this stuff so serious that they’ve even prepared some “Emergency Scenarios”. It is actually for some natural disaster or epidemic survival purposes, but better to be safe than sorry, right?

Here you can find some short information about it: Would You Survive Zombie Apocalypse??

Knowledge For Our Survival 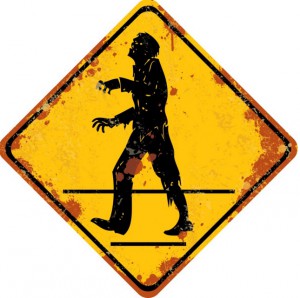 As they say, knowledge is power. And in our zombie survival inventory there is one more thing that we should carry beside machates and firearms. It’s a zombie survival guide book. Would you really like to learn everything from the beginning on your own without any help and hope your survivor ass not to get eaten?? You’re expecting too much.

The best zombie survival book by far that I’ve come across with is “The Zombie Survival Guide” by Max Brooks. Max Brooks is also the author of the book “World War Z”, reminds you something??

If you guys think that this is a total joke or some useless short written book, think again. The Zombie Survival Guide is actually a very detailed book on everything related to zombie survival. Every possible zombie-human encounter is virtually outlined in the book, detailed plans for defense and attack are drafted, past recorded attacks from 60,000 B.C. to 2002 are recorded.

This can actually be a great halloween gift or just a great bet for zombie addicted friends. 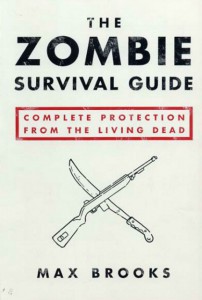 The Zombie Survival Guide is 288 pages of intense undead knowledge that no one can provide you. Book consists of 7 big chapters with various themes from types of zombies to detailed weapon and combat techniques.

Every chapter’s spectrum is actually very wide and well written that leaves no question marks behind. Just in parts related to weapons you can find any possible weapon idea from sharp edged knives to rifle fire arms, explosive cocktails to slingshots, chainsaws and many more. It is so detailed that you can find many armor information from chainmail to kevlar and learn different warfare strategies like biological warfare, zoological warfare, nanotherapy and many more to aid you during your survival. THERE ARE NO RULES.

You’ll also get to know different types of zombies, their attributes and behaviours. After that you’ll learn the 4 types of outbreaks.

If you’re a zombie enthusiast or just at least interested in the subject, I’m sure that this is a read which you’ll finish in no time and crave for more. And The Zombie Survival Guide makes a great gift for your zombie addicted friends.

I think most of you zombie fan folks have watched the movie “World War Z” or at least heard about it. The one where Brad Pitt gets badass again and saves the world. I actually tought that the whole movie was kind of a Pepsi commercial, but that’s something to discuss another time. Here’s the trailer of World War Z:

This guy (the author Max Brooks) has written the book World War Z which the film was originated from. He has some good zombie credit under his belt and travelled a lot to write his masterpieces. He’s the Studs Terkel of zombie journalism.

He was born in New York City May 22, 1972. He’s the son of comedy film producer Mel Brooks and actress Anna Bancroft. You can check out his detailed biography from here: Max Brooks Biography

What Do Other People Think About The Book

User feedback is actually huge and enormously positive. At Amazon the book has been rated 4.5 out of 5 stars and has 1590 customer reviews, a huge percent is highly positive. Here are some of them: 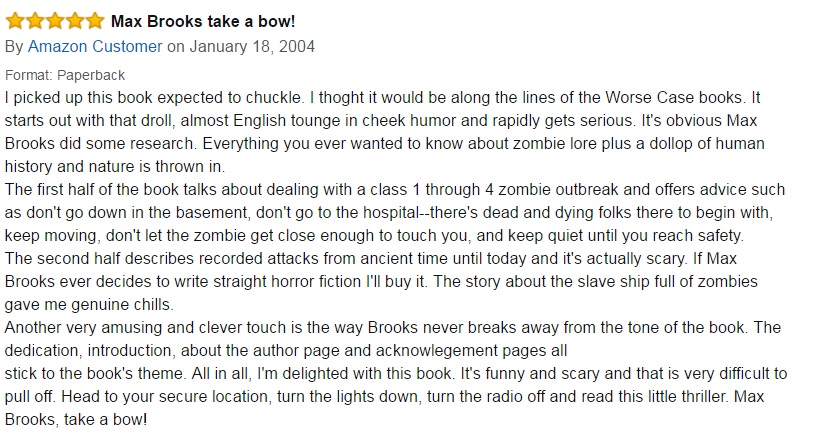 Where To Get One??

The best place to get one for yourself is Amazon.com. Due to it’s great retail service, discounts you can come across and many user reviews you can check out from there makes it a number one place to get stuff for millions of people. “The Zombie Survival Guide” is available in paperback, hardcover and kindle. Hardcover is available for $40 and you can get the paperback version for $8.46. Here is the link where you can get one for yourself or others 😉 :

>>Click Here To Get The Zombie Survival Guide: Complete Protection from the Living Dead<<

Now you know what to take with you when the time comes for the dead to walk the earth.. Better don’t get stuck in the middle of apocalypse without a survive zombie apocalypse book.

If you have anything to ask or state, please leave a comment down below. You can also contact directly by mailing to santa@santagotgeek.com. And don’t forget to share, because SHARING IS CARING!!! See you soon and keep in touch!

4 responses to “Survive Zombie Apocalypse Book – Survival of the Smarest”